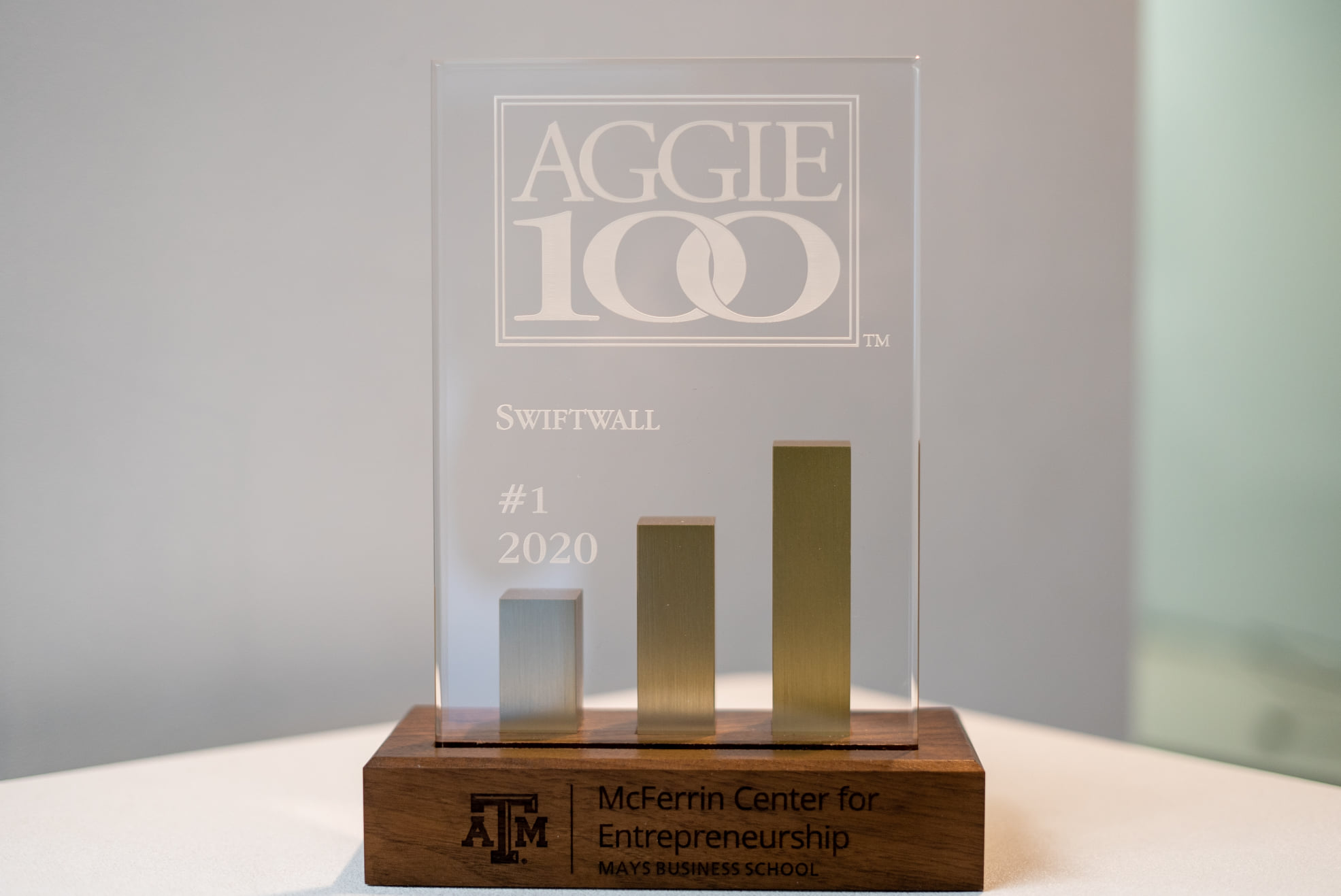 SwiftWall® Solutions of Midland was selected along with 100 companies from around the world for the 16th annual Aggie 100. The annual award honors the fastest growing companies owned or operated by former students of Texas A&M University. With a compound annual growth rate of 234%, Swiftwall® Solutions earned the number one ranking. The Aggie 100 is founded and hosted by the McFerrin Center for Entrepreneurship at Texas A&M University.

Swiftwall® Solutions was founded in 2014 by Joe Asiala, an Engineering graduate of Texas A&M University and Rick Brouwer, a graduate of Central Michigan University. Asiala, an engineer who worked for 30 years at Dow, developed the modular wall system manufactured and sold by Swiftwall® Solutions. The system was designed to provide an aesthetically appealing, fast, and sustainable solution for solid temporary walls and partitions.

“Our team was thrilled to be honored by Texas A&M for our work,” said Asiala. “It has been incredibly exciting to see our product utilized by a variety of companies and seeing the positive feedback. We’re constantly learning and finding new applications, which will continue to serve us well into the future.” Swiftwall® Solutions products have been utilized at construction sites, museums, casinos, airports, universities, trade shows, and a variety of other commercial spaces. The product was most recently used for a retail space buildout at Los Angeles International Airport, one of the company’s largest projects to date. The temporary walls are installed in 15% of the time required to install traditional dry-wall, and more environmentally friendly as it can be disassembled and reconfigured for other uses. The 100 Aggie-owned companies with the highest compound annual revenue growth from 2017 to 2019 were revealed and recognized during a live-stream awards showcase on Friday, November 6, 2020. The awards production is available for viewing at tx.ag/2020Aggie100.

“The Aggie 100 brand represents the most elite group of successful Aggie entrepreneurs, whose endeavors have truly made our world a better place to live,” said Blake Petty, Director of the McFerrin Center for Entrepreneurship. “Texas A&M recognizes both their individual efforts and their collective success, in the same way these honorees acknowledge the important role our beloved university played in the development of their character. The McFerrin Center for Entrepreneurship proudly embodies the legacy through which our Aggie 100 honorees can contribute to developing the next great generation of Aggie entrepreneurs.”

About Aggie 100
Aggie 100 honors the 100 fastest growing Aggie-owned or -led businesses in the world. In addition, it fosters a network of leaders who inspire the next generation of Aggie entrepreneurs. While there are many ways to define business success, Aggie 100 uses growth rate as an indicator as it reflects a ventures capacity for job creation, product acceptance, and entrepreneurial vision. Nominated companies are ranked by percentage of compound annual growth in sales or revenues (net of returns), over a three-year period. Nominees are required to provide detailed company information to PKF Texas who then evaluate and rank the nominees based on these requirements. The 100 fastest growing organizations, or Aggie 100 Honorees, are recognized each Fall during an invitation only awards dinner and reception. In addition to growth and leadership criteria, companies named to Aggie 100 must operate in a manner consistent with the Aggie Code of Honor and the values of Texas A&M University. Aggie 100 has grown significantly from its inception in 2005 and is now being emulated by a number of other top universities, including several of our SEC partners.